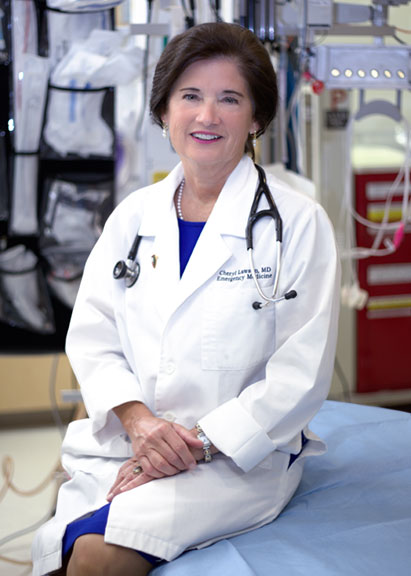 If it seems extraordinary that one person could hold that many positions, consider: this isn’t even the full list. But then again, Cheryl Lawson is no ordinary physician.

For as long as she can remember, she wanted a career in medicine.  When she was old enough, she became a nurse’s aid at Riverside Hospital, and she majored in biology at James Madison University (’78), intending to go to medical school after graduation. “In those days, JMU wasn’t preparing its graduates for the application process to medical school,” she remembers.

But she never saw it as a defeat.  Instead, she went to the School of Medical Technology in Greenville, SC, afterward landing a job in the chemistry and microbiology lab at Norfolk General Hospital. Wanting a more hands-on experience of helping people in crisis, she volunteered with the Virginia Beach Rescue Squad.

She enjoyed the work, but never lost interest in becoming a doctor. In 1986, she enrolled in Eastern Virginia Medical School. She completed her medical degree at Stanford, but returned to EVMS for her internship and residency in Emergency Medicine.  “The fast paced clinical assessment and treatment required in ER medicine provides the challenge and satisfaction that defines our specialty,” she says, “and has made my practice of medicine what I love to do.”

As former President of the Medical Staff and a practicing staff physician in the ER at Riverside Regional Medical Center, Dr. Lawson’s passion for her work is clearly evident. “I’m able to use every bit of my medical training daily. Whether in the ER or out in the field, I feel like a detective. I often have limited information and limited time, and I have to use every inch of knowledge that I have to make quick and potentially life-altering decisions for the patient.”

When she says ‘in the field,’ she means it literally. Throughout her career, Dr. Lawson has focused on ensuring that emergency responders at all levels have the knowledge, technology and training they need. That’s often meant spending time in the field herself.

As one of the Operational Medical Directors for the Hampton Roads Metropolitan Medical Response Team, Dr. Lawson is among the first responders to local mass casualty events. “We’re a team of doctors, firefighters, first responders and support personnel, working under the Department of Homeland Security,” she says, recalling being part of the team that responded to the 2008 tornado disaster in Suffolk: “The devastation was unbelievable. It was nighttime, and we went through rubble looking and listening for victims.” As a member of the federal response team known as Virginia-1 DMAT, she deployed to the 2006 funeral of President Ford, the 2008 Democratic National Convention, and more recently, Hurricane Sandy in 2012.

As Regional Medical Director of the Peninsulas EMS Council (PEMS), she’s also helped build emergency response protocols for a service area that includes the sixteen cities and counties located on the Virginia Peninsula, the Middle Peninsula and the Northern Neck, on the western shore of the Chesapeake Bay. “It can take as long as 30-40 minutes for an ambulance to reach some of these areas,” she notes, “and another 30-40 minutes to get back to the hospital. The PEMS Council, through its regional protocols, enables EMS providers to start treating patients en route, and assists with coordinating educational courses.”

During her time with PEMS, they became one of the first regions in the Commonwealth to set up EMS transmitted EKGs directly to the closest hospital. The region’s hospitals collaborated to purchase EKG equipment for more rural rescue squads and held training classes for providers. “We’ve worked diligently to train our EMS providers to quickly identify the symptoms of a stroke or heart attack. This way, when those patients arrive at the ER doors, the appropriate medical team meets them at the door, ensuring better patient care and potential outcomes.”

She serves as EMS Medical Director of the City of Newport News, a position she’s held for seven years.  The providers, she says, “totally devote themselves to helping people, and they want to do the best they can. Being their medical director has been a most gratifying position. I’m a Newport News native, and I feel a strong commitment to the community that’s done so much for me.”

Dr. Lawson is particularly proud of the Newport News EMS agency’s Rapid Sequence Intubation program. Under her direction, two of the agency’s EMS captains took the project on, and she says, “They’ve done an excellent job.  They recently set up a system where each time the procedure is done, all credentialed RSI providers get a synopsis of what happened: good or bad and lessons learned as part of our quality improvement program.” She explains, “We’re the only agency in our region that performs RSI. It’s something we’re can do in a controlled setting in the emergency department; but in the field, when patients are struggling to breathe, circumstances can be less than perfect. We’ve developed protocols and initiated training and testing of our lead providers so they can perform this skill in those situations. They can control the patient’s airway and initiate more critical care in the ambulance, rather than struggling with an hypoxic or brain injured patient.”

No matter which title she’s using, it’s clear that Dr. Lawson’s career provides her with tremendous satisfaction. “It’s so gratifying to use your training and to know that you’ve saved a life,” she says. “Life is the most precious thing patients and their family have.”<