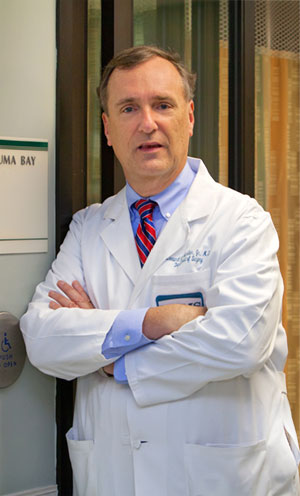 It’s not unusual to hear physicians say they chose a career in medicine because of the influence of a childhood doctor.  Similarly, it’s not uncommon for medical students to choose their specialties because of their experience with faculty members.

In Dr. Leonard Weireter’s case, both situations pertain.  He had a lifelong interest in science, and remembers being in grade school when a family member needed an operation.  “I became very curious, and I started asking questions,” he says, “and all of the medical personnel – including the surgeons – took time to answer them.”  He’d always been fascinated by how the body works, and how diseases work; and when he entered college, it was with the idea of pursuing a pre-medical curriculum.

During his third-year surgery clerkship, “I knew right away that surgery was my field,” he remembers clearly.  “It was a trauma center in western New York, and I was working with faculty who were doing a lot of high-end injury cases. They really sparked my interest in trauma and acute care.”

He went on to complete a residency in General Surgery in Buffalo, and then a fellowship in Trauma Surgery and Critical Care Medicine at the Maryland Institute for Emergency Medicine Services Systems at the University of Maryland.

Fortune followed him to Maryland, as it was there that he met another young surgeon:  Dr. L. D. Britt.  “We began our fellowship together in 1985,” Dr. Weireter says, “and we’ve been working together pretty much ever since.”  The ‘pretty much’ exclusion refers to Dr. Weireter’s additional year in a shock trauma fellowship after Dr. Britt returned to his Hampton Roads hometown.  “I took the extra year because I wanted to work with a faculty member who was doing exciting things with shock trauma patients,” Dr. Weireter says.  “When Dr. Britt recruited me to come to EVMS, I knew I’d have the opportunity to do general surgery as well as the specialized critical care medicine and trauma surgery I trained for.”

He’s been at EVMS since 1987, and says, “The job has been superb in terms of what I’ve been able to do.”  With Dr. Britt, he helped mature the Level One Trauma Center that EVMS provides surgical staff for, one of only five in Virginia.  He’s had the opportunity to take care of patients at the Trauma Center, and as one of its directors, to begin to influence expectations and methods of trauma surgery and care in Hampton Roads. He’s also become heavily involved with the American College of Surgeons, which gives him a voice in trauma care at both the state and national level as a member of its Committee on Trauma and the Board of Governors.  “It’s intensive work, but very gratifying professionally,” he says.  Previously he has been chairman of the COT committee on Mass Casualty and Disaster Management and chair of the COT Advocacy section. He’s recently taken on the position of Vice Chair of the Committee on Trauma for the American College of Surgeons, assuming even greater responsibilities having to do with trauma systems across the United States.

In 2013, Dr. Weireter was appointed to the National Quality Forum’s Regionalized Emergency Medical Care Services Measure Topic Prioritization expert panel, which provides guidance to the Department of Health and Human Services’ Office of Preparedness and Response.  It’s a broad topic – encompassing both natural disasters and manmade situations – that he’s focused on extensively throughout his career.  He points to a recent series of articles in The Washington Post that notes Norfolk is second only to New Orleans in terms of devastating flood risk.  “We – EVMS, Sentara Norfolk General Hospital and CHKD – are eight feet above sea level, and just 300 yards from the water,” he explains.  “The flooding in a Category 1 storm or greater could make us virtually inaccessible.”

Dr. Weireter does much more than just explore and write about all aspects of the region’s preparedness: he’s participated in several task forces working on contingency planning in the event the campus floods severely.  And in April 2013, he was part of a team that included personnel from EVMS, Sentara and CHKD that ran an active shooter drill.  “We decided there were enough of these events happening across the nation,” he explains.  “We’re a ripe target: we’re a hospital, we’re a school.  We knew we ought to be thinking about how we’d respond, rather than making it up in the moment.  We felt that until we hard-core practiced and drilled it, we hadn’t done due diligence.”

Pursuing due diligence, the team spent months drawing up a plan, making sure everyone knew exactly what to do in the moment.  They mobilized campus police, and city and state police as well, and ran the drill, which contemplated a gunman shooting randomly through Lester Hall.  “We did a half-day long exercise, and learned what worked, as well as what didn’t,” Dr. Weireter says.  “We learned some very valuable lessons.  We’re talking about doing something similar again.”

In the little free time he has, Dr. Weireter and his wife enjoy traveling for his growing ACS activities, and admiring the three successful children they’ve raised.<