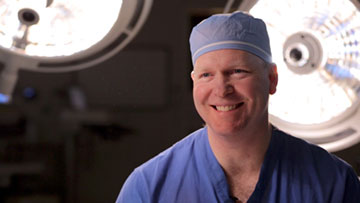 The next generation of artificial cervical discs is all about motion. As alternatives to spinal fusion surgery – which permanently immobilizes damaged regions of the neck – the newest replacement prosthetics aim to mimic the body’s natural structure and movement.

Dr. Jeffrey Carlson, a fellowship-trained orthopaedic spine surgeon, has closely followed the development of one such promising device: the M6-C artificial cervical disc, built with a viscoelastic nucleus, fiber annulus and titanium endplates to absorb shock and promote full range of motion.

The artificial disc received FDA approval in February 2019. This fall, Dr. Carlson became the first surgeon in Virginia to complete the training required to offer it to patients.

“I believe spinal surgery will increasingly go in this direction in the future,” he says. “Especially for younger patients, this is a better option for lifelong benefits and long-term function in the neck. Bodies simply do better in motion.”

Fusing vertebrae with a bone graft and plate is often effective for pain relief, but the procedure leads to limitations on activity. Advanced artificial discs, on the other hand, support motion in all directions: backward and forward, side to side, up and down, and left and right.

Instead of spending extended periods resting or wearing a brace, patients are encouraged to move around shortly after surgery. That push to return to action sooner follows similar trends in total knee and hip replacements.

Dr. Carlson has successfully performed disc replacements in the neck for more than 15 years, starting with now outdated metal-on-metal prosthetics. He believes improved designs and materials will transform treatment for patients who have a herniated disc or arthritis but still have healthy and mobile bone segments surrounding those areas.

“If it’s just a disc that’s the problem and not the bones themselves, why fuse them?” he asks. “Why not fix that one problem and put something in there that moves? My feeling is that applications of this will one day turn cervical spinal fusion into a secondary option.” Replacements also can be an option for patients with spinal stenosis, he adds.

Based on positive outcomes in his patients and a growing number of national studies, Dr. Carlson has been a strong advocate for insurance coverage of cervical disc replacement procedures. Like most fusions, the surgeries typically can be done on an outpatient basis.

Studies on the M6-C device, for example, showed 91.2 percent of patients reported an improvement in neck pain versus 77.9 percent of anterior cervical discectomy and fusion patients; rates for improvement in arm pain were 90.5 and 79.9 percent, respectively. Patients also had a reduced rate of opioid use for post-surgical pain relief.

The next step could be research into the efficacy and benefits of two-level disc replacements – potentially another step away from fusions.

“Our mission is always to look for the best options to get patients back to the life they love, with as much natural function as possible,” Dr. Carlson notes. “My goals in spine surgery innovation have always been to advance technology and equipment that helps us do that.”

Outstanding Achievements is a new feature that recognizes a local physician for accomplishments in the areas of education, medical innovations or introduction of new treatments and technologies to the region. It is our honor to recognize these accomplishments.

Please let us know if there is a physician who deserves recognition in this column. Email: holly@hrphysician.com