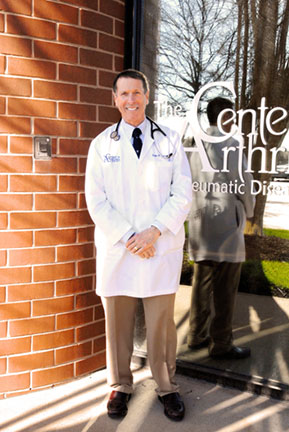 In the middle of the twentieth century, when Dr. Lidman’s father was a general internist in Norfolk with a special interest in noninvasive cardiology, he didn’t have the benefit of the technological advances available to today’s cardiologists.  “In those days, heart doctors relied on stethoscopes,” he says of his father, who died in 1977.  “Cardiology was still in its relative infancy.”

It’s been different for Dr. Lidman, who has practiced rheumatology for nearly four decades:  he’s seen and incorporated the tremendous advances that have been made in his specialty throughout his career.

Pursuing a career in medicine was an early and easy decision for Dr. Lidman.   After earning a BS in Zoology at Duke, he took his medical training at Johns Hopkins, where, he says, “I was lucky enough to work with a true pioneer in the field of rheumatology, Dr. Mary Betty Stevens.  What attracted me was the fact that we were dealing with multi-organ disease states, multi-system diseases, so we really had to know about every organ system in the body, and we needed to understand the concepts of immunology.  It was an intellectual, rather than a procedure driven specialty.”

At Vanderbilt, he completed his residency and internship in internal medicine, followed by a fellowship in rheumatology.  During his internship, he once again had the opportunity to work with a rheumatology pioneer, Dr. John Sergent.  A second fellowship at the Medical University of South Carolina followed.

Returning to Hampton Roads in 1981, he joined the Center for Arthritis and Rheumatic Diseases, where he has practiced ever since.

During those years, he has seen several advances in his field, among them the introduction of immunosuppressant drugs to treat rheumatic diseases – “with all the baggage they carry,” he says, “in terms of lowering the body’s resistance to infection, and in some cases, making the body more likely to develop other complications, such as cancer.”  Patients taking these traditional disease-modifying antirheumatic drugs (DMARDs) are at higher risk for infection.

Of the advances he’s seen, he says, “The most important has been the advent of biologic therapies, the biologic response modifiers, which are used to target specific mediators of inflammation and mediators of joint damage.  They may have a targeted effect on particular branches of the immune system in both rheumatoid arthritis and the inflammatory connective tissue diseases we deal with, such as lupus and scleroderma.”

Dr. Lidman has participated in a number of clinical trials for medications to treat rheumatic diseases, often as principal investigator.  “The newer drugs, whether they’re biologic agents or so-called small molecules, are targeting either specific mediators of inflammation or tissue damage or they’re acting on signaling systems within cells, which if inhibited, will decrease the production of these inflammatory or tissue destructive mediators,” he explains.  “And the trend that one hopes to develop in rheumatology – as in every other specialty of internal medicine – is that you target your therapy.  In other words, if you have a fly, you use a fly swatter, not a baseball bat.  All of the medications we use have the potential collateral damage of increased infection.”

Because many rheumatic diseases have nonspecific symptoms, many patients aren’t diagnosed until they seek a doctor’s care for the pain associated with significant joint damage.  “We do know that there are genetic markers we can test for that predict a patient’s risk of developing the disease,” Dr. Lidman explains, “but it doesn’t mean the patient will necessarily develop the disease.  There’s a genetic marker that is associated with an increased risk of inflammatory back disease.  There are genetic markers associated with an increased risk of rheumatoid arthritis and lupus, but then something has to trigger that, whether it’s an infection or some other environmental exposure – something has to trigger the development of that condition in the appropriate genetic background.”

In some cases, Dr. Lidman says, “if we can determine what mediator is driving the disease, there’s testing available now of biomarkers that can help us choose the agent, whether a drug or a biologic, that’s best suited for that patient, much the same way an oncologist can determine what chemotherapy regimen is best for a cancer patient.  That’s been a significant advance within the last five years.”

The ultimate goal is to be more specific in therapy.  “Our goal is to do what they’ve done in oncology,” he says, “which is to actually determine an individual’s inherited risk or genomic risk of developing certain auto inflammatory or auto immune diseases and be able to target those conditions directly.”

In terms of advances yet to come in his field, Dr. Lidman is optimistic.  “I think one of the things coming down the road will probably be gene manipulation, gene therapy,” he says.  “It might be possible in the future to inject something into the knee that will actually cause cartilage to regrow.  Nothing does that at this point.”  Today such patients’ options are a cartilage transplant, or total knee replacement. And, he adds, there are rheumatic conditions that are responsive to stem cell transplants – although it may be years before that will be generally available.

Right now, like many of his colleagues in rheumatology, Dr. Lidman is more concerned with how the next advances will be paid for.  But as he reminds us, musculoskeletal diseases remain the major cause of disability – and lost time from work – in the United States.