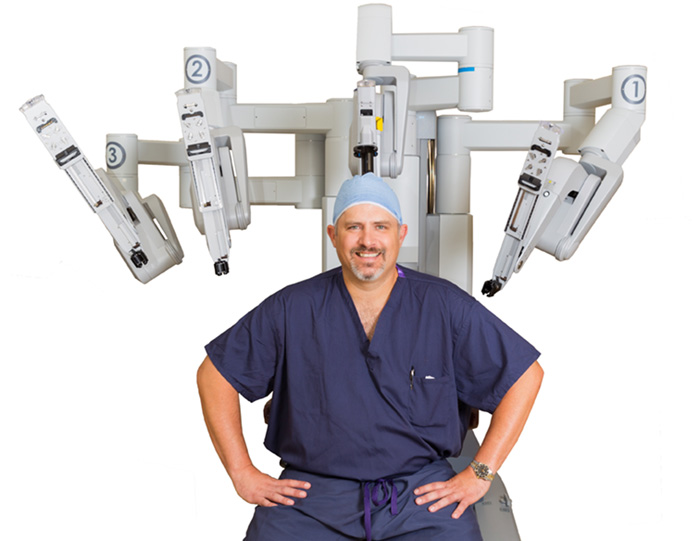 Like many physicians, Scott Burgess says he decided on a career in medicine when he was very young – although not many can say they had made the choice by the time they got to kindergarten.   “I never considered doing anything else,” Dr. Burgess says.  The decision to become a surgeon took a little longer – until the fourth grade.

He never waivered, and by high school, he was in the Conley scholarship program, and guaranteed acceptance into medical school.  He worked as a student research fellow in the division of cardiothoracic surgery from 1992 to 1994, and as a research assistant in the division of general surgery from 1992 to 1998, at the University of Missouri-Columbia School of Medicine, where he also earned his BS in biological sciences and his doctor of medicine.

The choice of urology for his specialty came at the end of his second year of med school.  “I had just finished the year when my father became severely ill,” Dr. Burgess remembers.  “I took a month off to help take care of him, and when I got back to school, I needed to find something to do for the month remaining.  Most rotations when you’re a third year student are two months, but all I had was one month.  I already knew I wanted to be a surgeon, so I chose a two-week rotation in ENT and a two-week rotation in urology.” He wasn’t sure what urology entailed at that point, he remembers, but found he was drawn to it, in part because “the attendings were very nice, very laid back – and they were all still married to their first wives!”  Between the camaraderie of the urologists, the appeal of their lifestyle and his very real fascination for the work, Dr. Burgess found his niche. He served a general surgery residency from 1998 to 2000, and a urology residency from 2000 to 2004, both at William Beaumont Hospital in Michigan.   In 2003, he was a Willet Whitmore Memorial Scholar at Memorial Sloan Kettering Cancer Institute.  He completed his fellowship in endourology/laparoscopy at Tulane University Health Sciences Center in 2005.

Dr. Burgess joined the Riverside Medical Group in 2005.   His caseload includes female as well as male patients, although the majority of his practice is treating men.  With its large military population, he says, Hampton Roads has given him the opportunity to treat men and women alike who have traveled all over the world, and thus exposed to many different substances that can allow urologic disease to develop – including Agent Orange.

The focus of his practice these days is laparoscopic and robotically assisted surgery for cancer patients.  In fact, he estimates fully 75 percent of his practice is devoted to cancer cases – kidney cancer, bladder cancer, and of course, prostate cancer.  “For better or worse, in Southeastern Virginia, we have an older population, and many of them get cancer,” he says.   “But with robotic minimally invasive laparoscopic surgery, and the improvements in technology and instrumentation, we’re able to offer patients invasive procedures that are now done non-invasively.  We can take out a big kidney through two tiny holes, one the size of my pinky nail and the other just three inches long.” The benefits of performing these procedures robotically and non-invasively are many.  Hospital stays are shortened, pain is decreased, and quality of life is restored sooner.

For prostate cancer patients, the benefits are even greater.  Ten years ago, Dr. Burgess instituted the robotic prostatectomy program, and two years ago, Riverside Urology upgraded to the newest version of the daVinci robot.  Now his prostatectomy patients are often home in about 20 hours, requiring no blood transfusions and needing much less postoperative pain modalities.

The daVinci robot ensures a far greater degree of precision, Dr. Burgess explains, and thus he’s able to preserve his patients’ sexual function and bladder control as well.   “The daVinci technique magnifies the tiny nerves and blood vessels 10 times,” he says, “so our accuracy is precise.  It also allows for far less post-op scarring because we can make the incisions so much smaller than other prostate surgery methods currently in use.”

Whatever the condition he treats, Dr. Burgess says, he enjoys the aspects of urology that allow him to build long-lasting relationships with his patients.  “We have patients with chronic incontinence or chronic infections, and we manage six or seven different types of urologic cancers that require vigilant follow up,” he says, “and if I take out someone’s prostate, that patient is mine for life.” Many of them tell him that he’s not like any surgeon they’ve ever met.  “I tell them that’s because of my family,” he says.  “My grandparents on both sides were missionaries to India, and my parents both university professors.  So I have a bit of pastoral history and a bit of education/teaching history that I bring to bear.”

The other trait he brings to bear with his patients is one he describes as almost indispensable for a urologist: a highly developed sense of humor, which is evident when he describes what he does “when I’m not doing doctor stuff:  I like to play golf, which I’m really bad at, and I like to barbecue, which I’m really good at!”  But most of all, he says, “I just like hanging out with my wife and my two daughters, Charlotte and Clara.”